Every time we have moved Irish has been great about getting us unpacked and settled in quickly. If it was up to me I would only unpack things as I needed them and take months before I was out of boxes. So while she is continuing to get us settled in here in Korea I thought I would jump in with my first effort on this blog.

The trip here was incredibly long as expected..  There was one hang up with our luggage, we got overcharged for the extra bags, and then Asiana wouldn't give us our boarding passes in Los Angeles until I got them a "luggage coupon" from Frontier.  There was a stressful hour of me running to the Frontier desk two terminals away while Irish waited with the kids as time to boarding ticked down. Frontier did not know what Asiana meant, but gave me a number they could call. Eventually it was sorted out, at least they gave us our boarding passes- I don't think they ever got the coupon they were asking for.

Aside from that travel went better than we could have hoped for.  People were repeatedly friendly and helpful. At the start Sunday morning the people at Frontier let us bring all our luggage straight to to a desk rather than shuffle through the line with more than 20 bags. On the first leg I was sitting next to a woman who was a therapist for Autistic children, which meant she had a bag full of coloring books and was happy to read to Ruby for half the flight. After the mess at LAX the person at the start of the security line could see we were struggling a little and waved us over to use the first class line. And then on the flight from LA to Seoul August slept for almost the entire flight, the girls slept for a good portion of the flight as well.  So Irish and I just watched movies.  The meals were better than I was expecting.  When I had the Korean option for dinner I got bibimpap, which is basically rice with meat and vegetables. I asked the flight attendant if I was supposed to pour the rice over the other stuff or the other way around, and she handed me a pamphlet titled "How to enjoy bibimbap" which I thought was helpful.  And the answer was rice into the bowl that had the other stuff, not vice versa.

Landing in Seoul we had lost one of Irish's shoes, one of Grace's shoes and my hat.  We never found Grace's missing shoe so she walked through the airport half barefoot.  Immigration went smoothly, then at the baggage carousel two people from the airline helped us with our bags,and as soon as we passed though customs two people from KIS were waiting for us and they had a bus to take us to our new home.

We are actually in a city called Yongin, a few stops from the end of the Seoul subway line. We are living in a neighborhood called "Good Morning Hill"  It is a huge collection of buildings, each over 20 stories.  We are on  the 15th floor of our building.  Getting off the elevator the first impression is underwhelming, this is what you see, it looks a little like the door to a safe. 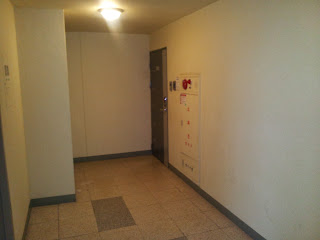 Opening the door though, it turns out we have a really nice place to live.  Below are a few pictures:

This is the entryway, with a closet for us to keep our shoes. 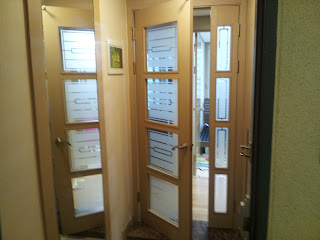 Past the entry is the living room. 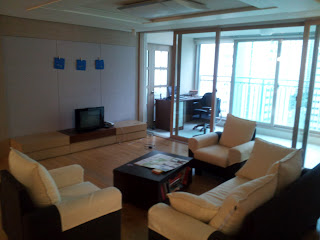 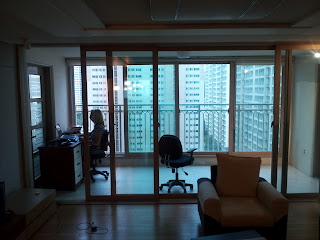 Kitchen and dining area.  Washing machine is through the sliding doors behind August. 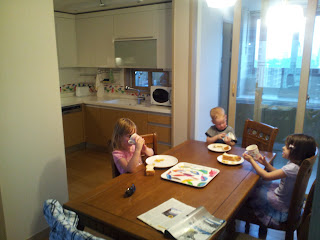 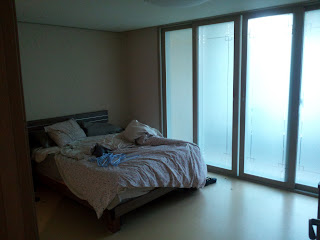 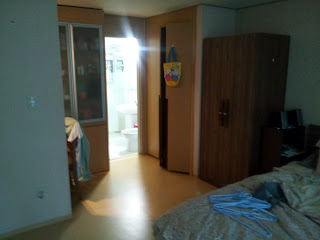 We are going to try to have all three kids sleep in one room so the third room can be used as a playroom, try to isolate the mess a little. August is a little too excited about this change, bouncing around at bedtime instead of sleeping, so we will see how this arrangement works out. 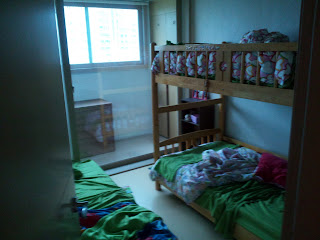 The room that will be a playroom: 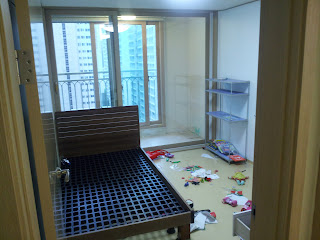 The view from the windows by the washer: 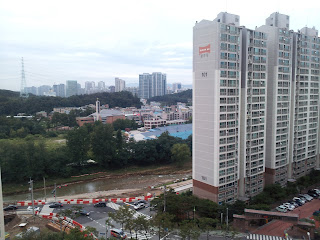 The view from the desk where I am sitting right now: 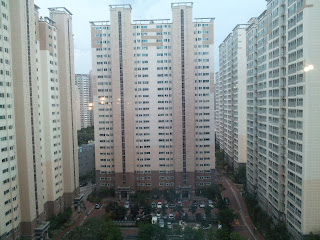 And now, everyone has fallen asleep here, and jet lag is catching up with me, I am falling asleep in my seat.  So more tomorrow.