Like everyone we are paying close attention to what is happening in the United States and other parts of the world. We see the efforts at social distancing and shelter in place orders ramping up toward something like we have had here in China and we continue to  hear a lot from friends and family who are getting started with this. People understandably want to get a sense of what to expect and maybe now a sense of optimism about there being some end in sight.

Back in January and February as China was first locking down we were unprepared for the scale of the response and we were adapting to unexpected changes every day. The required masks and temperature checks everywhere were pretty easy to go along with. Then the roadblocks and walls went up around our neighborhood. Everything closed up, deliveries were stopped. The expectation, and really the only option, was to stay indoors. It all felt oppressive, and then gradually became just the day to day reality. Each additional restriction was a source of concern, but then just something we had to get used to.

We held on to the idea that it was all a response to an immediate crisis and that things would return to normal before too long, we just needed to be patient. The initial school closure of two weeks had been a surprise. When that stretched on for two more weeks, and then to an open ended closure we still thought that at least by Spring things should be returning to normal.

When we decided not to leave China at the start of all this we thought we could use the money we would save for a trip somewhere nice during Spring break, it seemed long off, a time we could look forward to. We found ways to adapt and cope. And a second anonymous essay was published in the Huff Post talking about this sort of thing.

So now it is April. Our Spring break just ended and it was a week not very different from the ones before it, spent almost entirely at home. The roadblocks are still up in our neighborhood, the walls are still in place. School is still closed. More significantly all travel into China is stopped which means we can not leave if we plan on returning. Even if we wanted to leave the flights out are increasingly limited and it is not clear where in the world we would go.

Before China stopped all foreigners from coming into the country they had shifted from in-home quarantine to a mandatory two week quarantine in government hotels. We have some friends who waited too long, missed the in-home option, and now they are finishing up their hotel stays. Their experience sounds somewhere between minimally tolerable and really unpleasant. Bad food, not enough water, broken refrigerator and TVs. Not stepping one foot outside the room for the whole two weeks. And as a family we would be confined to our room with our kids. It sounds like something to be avoided if at all possible.

We have been hearing about China easing up some of the restrictions over the past few weeks, but that has not been consistent throughout the country. The government in our city seems to be very cautious, and the local government in our part of the city even more so. We have heard that this is in part because we are close to the capital. It also seems likely that there are risks for them associated with easing restrictions compared to just keeping them in place.

However, over the past few days there have been some small but promising changes.

A section of one of the blue walls was opened this week to allow pedestrian traffic.
There are still guards there checking IDs but they seem more casual than the ones at the roadblocks, just waving us through when we held up the ID. Significantly this allows us access to the market across the street from our school. It was incredibly nice to see the vendors doing a  thriving business. We went around and bought fruits and vegetables along with some snacks. Then we got takeout dinner to bring home. 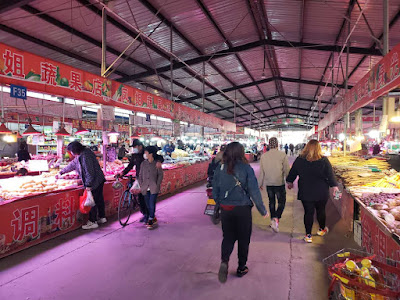 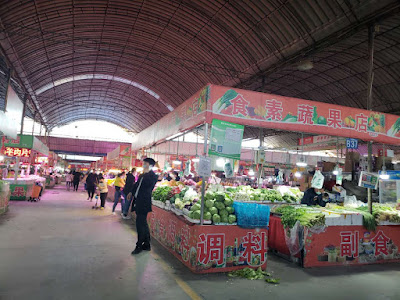 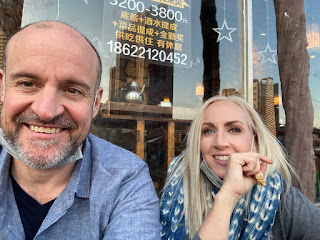 There is another new app for our phones that creates a green QR code if you report that you are healthy and have not traveled anywhere. It seems like this system relies on people being honest as they fill it out. But with this app Didi drivers are now able to come in to our neighborhood. This is a huge shift for us. We are able to get around the city again.

Ikea has opened, with employees strangely covered from head to toe. We are still watching the Price is Right in the middle of the day with our dog who is thrilled we are around so much more. We are getting some more exercise with a new pull up bar as we wait for the gym to reopen.

Some restaurants are opening up in a limited way. On Friday we met friends at a mall. This place has outrageously expensive retailers, Gucci, Prada, we have never been able to understand how they do enough business to stay open. But the mall also has a great pizza place. There is a rule that there can only be two people per table, so we took up five tables and had a great time. We have been spending very little money recently so we were feeling rich and over ordered by a little. 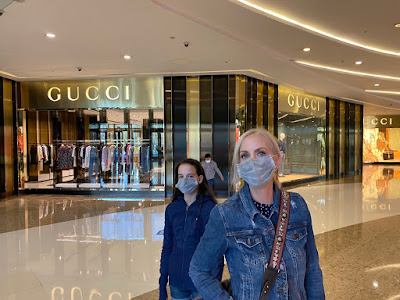 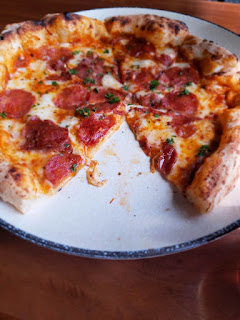 Throughout this there have been a number of small losses and disappointments.
Nothing on the scale of the medical crisis that is happening or the economic catastrophe that seems to be taking shape. But these small things are still real. It stung as we watched planned events get cancelled. The girls had a model UN trip to Beijing they had been looking forward to. There was going to be a teacher workshop in Bangkok. Augustine had grown remarkably interested in baseball watching spring training on the MLB network until all sports were suddenly cancelled. The kids experience of 7th and 4th grade as a whole will have been an unusual one. As teachers we feel for all our students as many of them struggle, in particular grade 12 students who will not be able to take the IB exams that they have prepared two years for, or have any of the concluding experiences a normal school year provides.

Looking ahead we are increasingly aware that for the first time in 8 years abroad it is likely we can not come back to America in the summer. This will be sharply disappointing. There is a lot that we like about living in China, but there has always been comfort in returning, seeing family and friends. And for now and the foreseeable future that may be out of reach.

Over the past 10 weeks it feels like we have gone through several waves of changes in our lives. We went from this being a distant news story to something that affected us in a very immediate day to day fashion. And now, we are increasingly aware that it is not going away any time soon. Our jobs appear to be secure for next year, though the school will have to make adjustments to changing circumstances. We are cautiously optimistic that in small ways our lives will be less constrained over the coming weeks, and we are also aware that things could turn for the worse at any time.  Beyond that we are waiting patiently again.