Over the past few weeks we have been reading the news a lot, we see the number of new cases in China appear to be dropping significantly. So far that has not translated into any big changes in our day to day lives though. Depending on our mood it can be unbearably frustrating or boring occasionally a little frightening. And then often it is just the routine we are getting used to.

The walls are still up in our neighborhood and the roadblocks at the entrances are still there. The New York Times had an article featuring our city and the Great Blue Walls  (Tianjin does not get represented very well in the article, it really is a nicer city than they suggest).


There continue to be no visitors and no didi (like Lyft) or taxis allowed in to our neighborhood. In fact, other neighborhoods have followed and many are now just as restrictive as the OC. Soon after our last post there was a new rule issued saying we had to use an app on our phone to scan a QR code every time we went into a public building. It seemed like big imposition when we were told about it, very Orwellian. But in practice the only places for us to go is a grocery store up the road and one convenience store. So we just scan and tell the government where we are every time we buy food.

As the cases in Korea and other countries have increased there seems to be a lot of fear of it coming back and starting again here. Restrictions for people who have been travelling are getting more rigid. Formal two week quarantine in home for everyone returning. And people living in apartments or residential hotels appear to have particularly close attention with sensors put on people's doors making sure they don't leave.

As a part of this new concern we were told the local government would be coming door to door checking on every foreigner in the neighborhood and checking our passports. In that context we were warned that the trip to the embassy in Beijing might lead to quarantine. This was frustrating, but then it took days and no one came to the house and eventually we were told we could just send in our information and they would come to us if they had any questions.


In the middle of all of this an article was published on the Huffington Post written by an anonymous couple. If you look closely at the blurred out picture it is not too hard to sort out one of the two authors. And if you follow us on Facebook or Instagram it is not much of a mystery at all.

It was meant to be a simple account of what it has been like living in this strange set of circumstances, similar to what we have been posting here. It was in no way a political commentary, and in writing it a lot of effort was made to not identify a city or a particular workplace.

It was sent off just to see if there was interest and it was flattering and exciting when they bought it. Then when it was posted it moved up from their personal stories section to the featured section and that was exciting too.  The response from friends was great.  It seemed to have been read and shared with others in the way we intended.

However it is the internet, filled with lots and lots of strangers and it turns out the internet is not always a place for thoughtful nuanced discussion. We had been divided on whether to even read the online comments. Among the themes repeated were the following:


So that part was depressing.  But on the whole still good for those anonymous people to be published authors. Writing it was a fun and remarkably collaborative process and a good way to pass some time.

The quarantine has also spread over our annual birthday season. On February 15th, 25th and March 1st we have three of our family's five birthdays (Grace and Ruby are in July).  It was all pretty low key. Breakfast in bed, lots of TV, cakes made with varying degrees of success by the girls. And then right before other neighborhoods got locked down friends took our kids for a sleepover and we were able to get away for one night at Four Seasons hotel.


For Augustine's birthday we ran out of cake mix so he had birthday brownies and put together a virtual party of sorts. One friend from the neighborhood came over and then they played the video game Fortnite online with seven friends from all around the world. August was remarkably understanding about the limitations of what is possible. And honestly he loves that game enough that he might have wanted to do it that way even if we were not under these restrictions.

Over the past few days there have been the slightest changes which we hope are like the first little buds that appear in spring time.

There was a negotiation to allow the import store DMart deliver to homes in the OC. We can order some food from them that isn't available at the local grocery (cheese!).  They have also started delivering packages to a central parking lot where you can pick up your package in the afternoon between 2:00-6:00.

Sam's Club is open and part of the mall closest to us opened too. Not Starbucks, but a few other stores including H&M. So now we can get $15 sweatshirts with sequined pictures of Garfield to wear to the grocery or around our house or back to H&M. But still. Is this something? Is this a hint? We hope.

There are also rumors of school opening for the upper grades as soon as next week... or maybe the following week...or possibly in April.

For now we continue with our routine. We are still working in the office upstairs while the kids are at school downstairs in the dining room. We go for a run almost daily. We have been watching movies and are fully up to date on TV shows and podcasts. We have been playing a lot of games as a family, both board games and on the PS4. We continue to work through this monster of a paint-by-numbers portrait. All told we are holding up as well as can be expected. 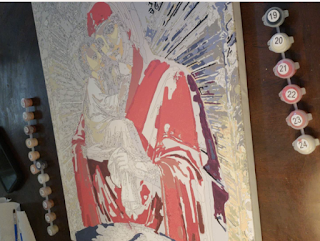 We keep following the news, watching this start to play out around the world, hoping for the best.  Just a few months until summer break, and maybe a new quarantine when we come to visit the United States?