For the past several years we have spent Christmas in Thailand but at the start of the school year Irish and I decided it was time to make a change.  New school, new country, new Christmas destination. We had thought about Sri Lanka before, just about the farthest place on earth from Denver, and we had heard good things from friends who had gone, so when we found a reasonable flight we booked it.

We flew from Beijing to Chengdu in Sichuan province and from there 6 hours to Colombo.  In all of our traveling we have become spoiled by seat back entertainment and Air China really let us down on both legs of the flight. Whole cabin shared movies in Chinese are not good enough to entertain our children.

In Colombo we were met by Amal, a driver recommended by friends, who took us to the first place we rented.  We planned an itinerary based on things we had read and recommendations, it turns out a lot of people follow roughly the same route. On our first day we would drive to the city of Kandy, the next day take the train from Kandy south toward the town of Ella where we would spend a few days at a tea plantation. From there further south to Yala National Park where would go on a safari, and then finally to the beach in Tangalle.

The ride from Colombo to Kandy was slow, a lot of traffic going through a series of towns before opening up into prettier scenery.  We were probably disproportionately excited to see monkeys running around on power lines and on guard rails. We stopped at a spice garden along the way, a tourist trap but still fun. The guide demonstrated the hair removing properties of some herb by rubbing it on my leg, it worked and there is still a big bald patch on my shin. They rubbed our heads and Irish bought some of their products before we moved on. 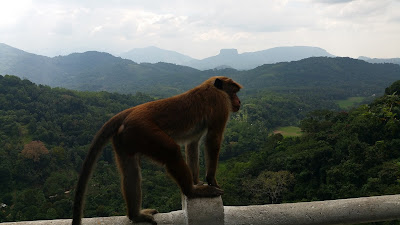 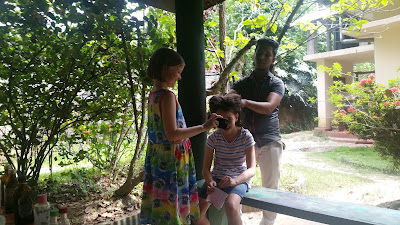 When we got to Kandy we went to the Temple of the Tooth where one of the Buddha’s teeth is kept as a relic.  It’s a pretty place, peaceful in the middle of a loud city. We bought some flowers and placed them on different altars while I kept reminding the kids that they were still Catholic, there is no getting out of that. 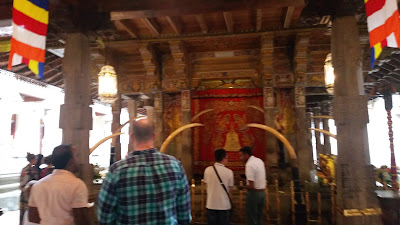 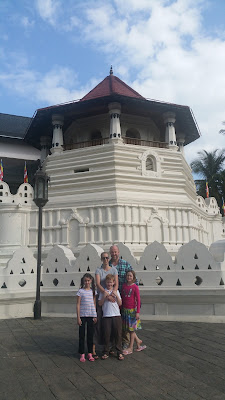 After checking into our rooms we went out to another tourist trap, a dancing performance that also turned out to be fun. At the start of it some of the dancers seemed to be winging it, bumping into each other and laughing, I was a little worried it was going to be a disaster, but then they successfully did some hand springs and spun some dishes and things got better. It ended with fire eating and them walking on hot coals which made a big impression on August. 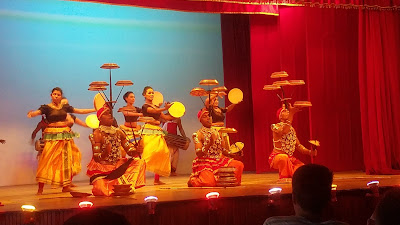 The next morning on our way to the train station we stopped at the Royal Botanical Gardens which had been highly recommended. This was the first of several places that exceeded our expectations.  Parts of it were sculptured hedges and flowers, and then as we walked further in there towering trees, more monkeys, and then hundreds and hundreds of huge bats. The bats were amazing, at first we could not figure out what we were seeing in the trees, then they started flying in big circles. 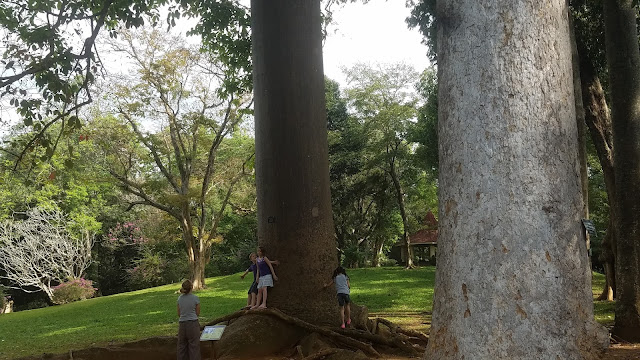 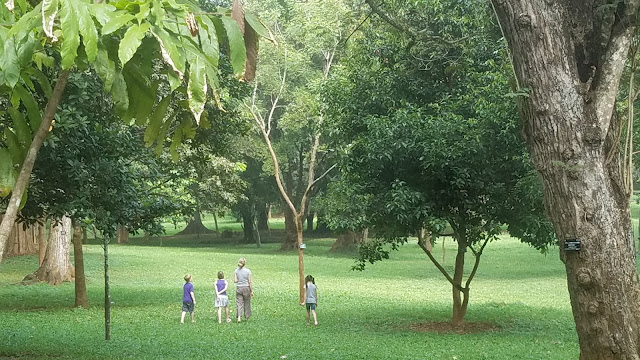 From the Gardens we went to a small train station south of Kandy where we had booked tickets in advance. I had heard a lot about this train ride, somewhere it was called one of the prettiest train routes in the world- which seems like a lot to live up to.  The train car we were in had an open outdoor area on either end and we spent a large part of the 6 hour trip out there watching the scenery. The ride absolutely lived up to the high expectations, the views were overwhelming at times, I found myself standing by myself smiling like an idiot just stunned by how beautiful it all was.  Often we were looking at terraced tea fields, then wide open valleys with water falls. As we passed through small farming villages children would smile and wave. 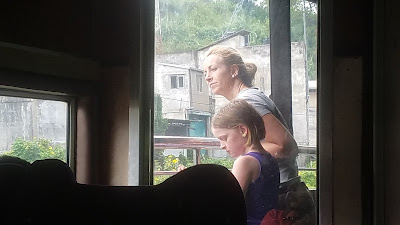 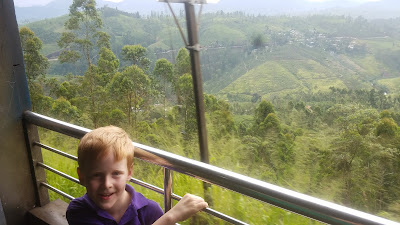 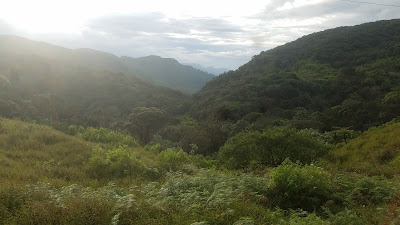 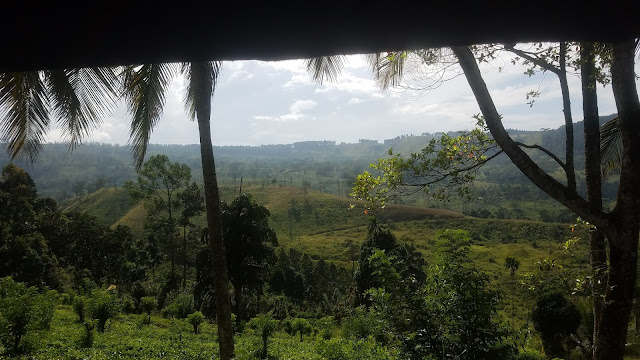 As we got close to our destination near Ella it had gotten dark and started to rain. We were staying at a tea plantation called Amba Estates and we had made arrangements with them to send a driver to the small local train station. The train only stopped for a minute and we were the only ones to get off, but the driver was there and he quickly got us to his van. The drive was a little unnerving, we drove quickly through the rain up into the hills on a small one lane road, then turned onto an even smaller road, and then eventually turned onto something that seemed more like a trail than a road.


Finally we pulled up to the farmhouse we had rented and it was fantastic. Getting out of the van we were met by several people who worked there. We were shown to our rooms, the kids would have the upstairs to themselves and Irish and I had a big room downstairs. In the kitchen dinner was waiting for us. We all went to bed comfortable and well fed.

I don’t think I can overstate how happy we were with our stay at Amba Estates. In the morning we woke up to a stunning view from our balcony across a valley with tea bushes and cows walking through. The cook and her helper were back and breakfast was extraordinary. Every morning we had a fresh loaf of bread, jams and raw honey that had been made there, coffee and tea that had been grown there, and then a variety of other things. We ate until it hurt. For the next several days every meal was an absolute pleasure. Curries and soups and vegetables, all grown there. By the third day Irish mentioned that it had been almost entirely vegetarian, just one dish with fish, but I had not noticed. Each meal felt like Thanksgiving. 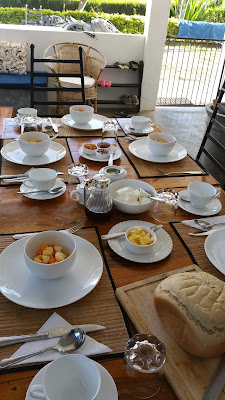 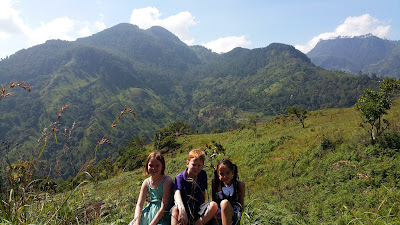 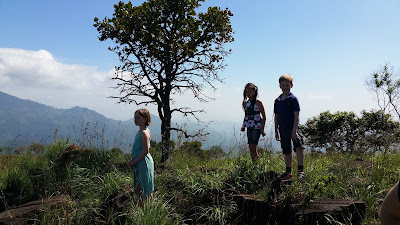 Between great meals we kept moderately busy, hiking up a nearby hill, swimming at the river at the bottom of the valley. We went on a short trip by tuk tuk to a popular set of waterfalls and went swimming there. On the way back an overloaded dump truck full of bricks got stuck completely blocking the road in front of us. We waited until a group came in a smaller pickup and unloaded a lot of the bricks allowing the big truck to move again. The whole thing seemed like a bad plan, and  a bit risky, like there was a reasonable chance the truck comes barreling down the hill , but in the end they got it sorted out and moved the truck without killing anyone. 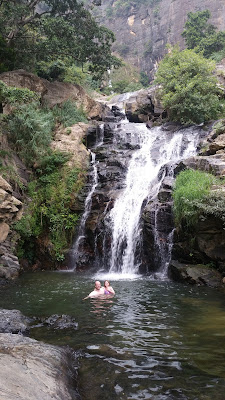 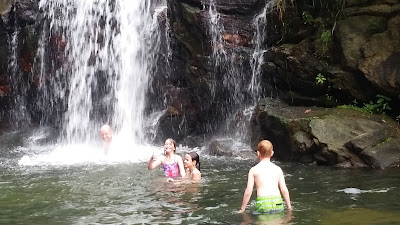 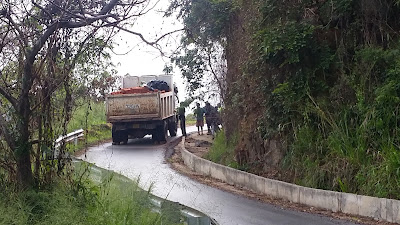 On our last day there we took a tour of the plantation, learned a lot about tea, very interesting for Irish and I, less so for the kids. While we walked through the fields there were mounds that looked like the things termites build. One of the workers had said they were snake holes, but I thought maybe it was a misunderstanding. I asked the tour guide about them, he said I was right, that they were termite mounds, and then after a pause said “but snakes like to live in them”.  He told us the difference between cobra bites and viper bites. If you are lucky a cobra might just bite but not release its venom. If it does release the venom though you are in a lot of danger. With a viper bite if you can stay calm then you might have time to get to a hospital, but with a cobra it affects your nervous system and it hurts a lot more so it is much harder to stay calm and then you are more likely to die. What we took from it was that we should avoid getting bit by snakes at all costs because there is no chance we would remain calm.

Finally after three great nights it was time to go. Sad to leave Amba Estate, but excited for the other things still to come.
Posted by jimandirish at 12:22 AM