Really? but Jim's out of town.

Let me start by saying, everyone is fine. But we're experiencing the health care system here in Korea. On Sunday, about 15 minutes before Jim left for his trip to Singapore, I had him check out August's *ahem* you know. Well, things weren't looking so good down there (it turns out August has a hernia). I called the director of KIS' wife, who is a nurse. She was very reassuring over the phone, so I allowed Jim to go to Singapore.

My boss recommended I get him checked out at the Baylor Clinic in Jeongja, which is very close to us. We found the building with no problem and made it to the clinic-on the 2nd floor. There are 2 floors to the clinic. Both say "Baylor Clinic" in English, but the rest is in Korean. The 2nd floor clinic had people in the waiting room, but no receptionist. We sat and as I looked around, I saw at least 2 signs that said "Audiology" so we decided to go to the 3rd floor clinic.

When we got there, I called Raina, our bilingual school nurse, and had her talk to the receptionist. It turns out the Baylor Clinic is an ENT. Good for a sore throat but probably not so good below the waist. However, Raina found out that there is a pediatrician on the 6th floor of the same building. Awesome.

As we waited for the elevator in front of a bank, a teller ran out and handed August a handful of candy, so he was in good spirits about the trip. He seriously had like 8 pieces of candy in his hands. 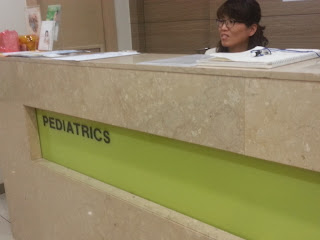 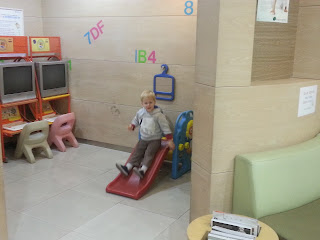 We waited for about 2 minutes and were seen by the doctor. In Korea you don't make an appointment, you just show up and it's first come, first serve. We were the only ones there (at 5pm on a Monday). The doctor checked him out and said "It's a hernia. He will need surgery." Good thing I'd looked this up before I arrived or I think that would have felt like a punch in the face. The doctor referred us to Samsung Hospital (the "best in Korea" according to everyone I've talked to), we paid our $20 out of pocket fee and went home.

Raina, the school nurse helped me make the appointment for Samsung the next day. August had his appointment yesterday. They are very foreigner friendly at Samsung. 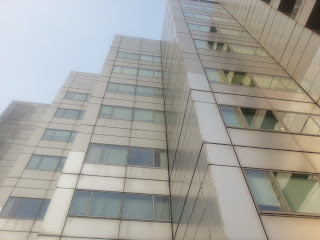 We started at the international clinic office. 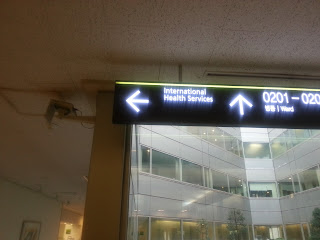 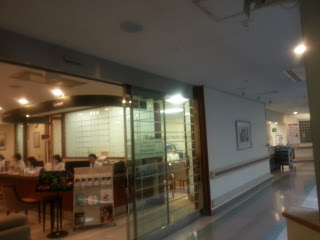 They got us checked in and a bilingual nurse? volunteer? teenager? young lady? walked us to Pediatric Surgery for our consultation. I'm glad she did because not only did she have to ask for directions on our way there, but another Korean was asking her where something was. So while all the signs are in English and Korean, it's still a really big place and easy to get lost in. 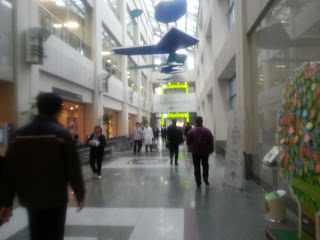 We waited outside this room and our name on the screen showed that we were next. We went in with the doctor after waiting for about 5 minutes. He was very friendly and spoke English fluently. He said that the procedure is an easy out-patient surgery. It should take less than 30 minutes and the incision is less than 1cm (for those of you who are American that just means "really small") and August should be back in school the next day. They do these surgeries on Wednesdays, so we have it scheduled for next Wednesday. Thank God Jim is coming home soon.

By the way, the cost of this healthcare, not as cheap as seeing the doctor. I'm glad we have insurance here. Just FYI.

To get to Samsung, I left my car at my school and August and I took a taxi so we wouldn't get lost. Since they called us a taxi from school, I brought him up to meet some of my students. One student thoughtfully pulled a balloon out of her desk and gave it to him. I'm assuming that when it is inflated it is a heart shape. But I thought that not blown up it was a terrific coincidence considering what the appointment was for. 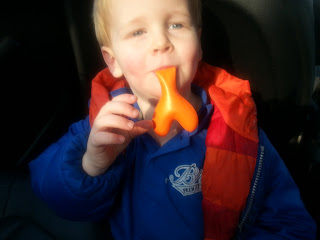 Here's a video of August getting his height checked: